Solitude Is Not Loneliness. Here’s The Key Philosophical Difference.

by Jonny Thomson: When was the last time you spent some quality time with yourself? 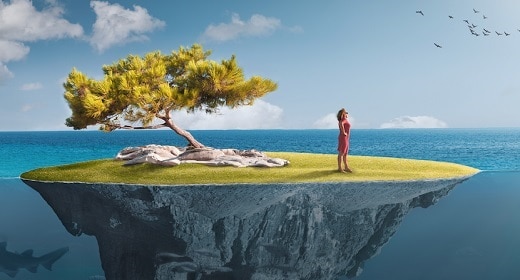 ou don’t have to be alone to feel lonely. Imagine there are two people sitting in the same busy café. One can feel quite contended, listening to music, tapping out an email, and people-watching between sips of coffee. The other can feel crushingly lonely, aware of how much they lack someone to share the moment with. This person watches the world not as some spectacle, but with a pining, longing ache.

There is a difference between loneliness and solitude, and both are highly complicated feelings. In any given day, we all have to spend a lot of time with only ourselves, inside of our head. That’s a normal part of life. But when does that become loneliness?

Spending time with myself

The German philosopher Arthur Schopenhauer is sometimes called the pessimistic philosopher, because he argued that “life swings like a pendulum between pain and boredom.” Inspired by reading the Hindu text called the Upanishads, he believed that the source of all life’s misery comes from our ceaseless and relentless desire. To be lonely, then, is to desire an absent want. It is to feel an emptiness that remains unsatisfied — to feel isolated, in need, or abandoned, but with no one to help.

Yet solitude is another thing altogether. To be solitary is to retreat into yourself, and to take great pleasure in your own company. When we’re solitary we reach into a communion with the self, and we can think as freely, and be as honest, as we like. It’s only when we are cut off from all other distractions, and other people, that we have the space to meditate on life, and to discover great things.

Schopenhauer knew, though, that not everyone does or can feel this way. We’re all lonely at times. In the busiest of cities, or on the quietest of walks, we can be painfully aware of a lack in our lives. Loneliness is looking at a hole. It’s the feeling of absence. What Schopenhauer offers is a change in perspective. Being inside our heads is an opportunity to spend time with ourselves. It’s a place of freedom and honesty, where our thoughts can go wherever we want. We can teleport ourselves to some magical world, relive a happy memory, or philosophize on reality.

It’s a blessing to talk to yourself, and you might be surprised by what you learn.

In the busy bustle of our lives, there is very little opportunity to embrace the kind of solitude Schopenhauer celebrates. Every dull or quiet moment is ruthlessly jammed with stimulation. We cannot wait for a bus, go to the toilet, or wait in line without the twitching need to do something. The quiet, solitary moments are filled with noise, lest we spend too much time with ourselves.

And Schopenhauer is right to say we lose something in this. According to research done by Bowker et al., the conscious and deliberate withdraw from social interaction (solitude, not loneliness) is linked with increased creativity. As Bowker puts it, “During childhood and adolescence, the idea is that if you’re removing yourself too much from your peers, then you’re missing out…[and] there has been such an emphasis on the negative effects of avoiding and withdrawing from peers.”

We are taught from a young age that sociability is good, that the crowd is happiness, and that belonging and fulfillment comes from relationships.

There is, of course, a lot of truth to this. But what being in company gives us in one area, it deprives us in another. When we take time to ourselves, we give ourselves space to imagine. When our mind is not constantly bombarded with content, it can create.

Michael Harris puts it well in his Solitude: In Pursuit of a Singular Life in a Crowded World, in which he writes, “Until recently, there were still moments in the day when the busyness abated and life’s pace decelerated. You would find yourself alone, separated from friends and colleagues, and you would be thrown back on your own resources, your own thoughts. Such interludes could provoke feelings of loneliness and boredom. Yet they also provided opportunities to tap into ideas, perceptions, and emotions inaccessible to the social self.”

When solitude is a problem

For a lot of people, there is no such thing as the solitude Schopenhauer, Harris, and Bowker describe. For these people, being alone is terrifying and terrible. While solitude might sometimes be necessary for creativity, loneliness can often be the dark and fertile ground to depression. Samuel Johnson, the literary giant and depressive, found much to fear in the quiet absence of loneliness. His best advice for those of a similarly melancholy disposition was, “If you are idle, be not solitary; if you are solitary be not idle.” (This quotation I first came across in the wonderful book, The Noonday Demon: An Atlas of Depression by Andrew Solomon.)

The balance between solitude and loneliness is a knife’s edge. There is no sure-fire way to tell the two apart. Solitude is often a chosen state, while loneliness is forced. But even this is complicated by depression. The chosen withdrawal from company and relationships is a classic red flag for depression. Decisions born of mental illnesses might be “chosen,” yet are no better for it. Ultimately, the only way to tell solitude from loneliness is to examine your most private self. Some people might be able to do this on the power of their own introspection, but others need help. Conversation, with friends, family, or a therapist, is what turns the spotlight on the self. It’s under this light that we can see just how far we really flourish being alone.