by Ananda Giri:  Senior Faculty Teacher at One World Academy. 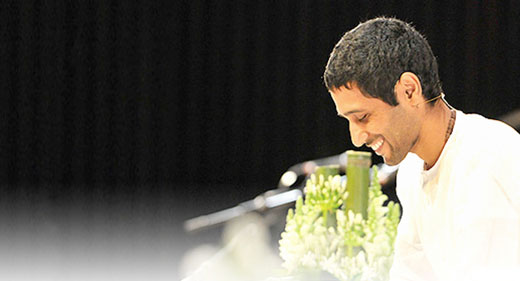 In May 1996, I was getting ready for my very first international travel and the destination was Buenos Aires in Argentina where I would be conducting a 3-day seminar. I had never left my home country until then. I was quite excited and also feeling a little nervous at the same time. The thought of having to stay away from home for almost three months didn’t make me very happy. I had no choice but to travel as the seminar was already announced and many people had registered.

Anyway I had complete trust in my Teacher’s decision and so I sought his blessings and left for the airport. “If you trusted in the Divine, you will find a good friend on the plane who would make you feel at home” were the last words of my Teacher as I left for the Chennai international airport.

My dearest friend Krishnaji, who had just returned from Australia, drove me to the airport. He had been due to arrive in India much later but, for whatever reasons, his schedule was reorganized, bringing him home earlier than expected. I knew in my heart that his timely arrival before I departed for my first ever travels abroad was by no chance but was a divinely guided coincidence. His kind words and loving hugs put me at ease and I entered the airport with lots of good memories.

On the plane I sat next to a very kind man who was on his way to Vancouver, Canada. He was very curious about my clean-shaven head and traditional Indian monk outfit and so he began a conversation with me. We started sharing about each other’s work and became good friends in the process. Since the carrier was British Airways I had to stop over in London for changing planes and we had to part ways there as he was traveling to a different destination. After more than thirteen hours of non-stop flying, I finally arrived in Buenos Aires. My hosts, who were a very kind couple, met me at the airport and drove me to their home where they hosted me for the rest of my stay in Buenos Aires. I was thankful to the divine for good friends and safe travels. I had a day to rest before the seminar commenced.

For our seminar we had a fairly large group of nearly eighty participants, consisting of mostly middle-aged men and women, with a few young people. They looked a very sincere group. We had a great first day, lots of deep realizations and transcendental moments. The second day of the seminar however began with a shocking encounter. I saw a young man walk towards me with a whip in his hand. I didn’t know what to expect of this. Argentina was new and it’s culture still strange and unfamiliar to me.

I didn’t know if I had done something inappropriate that had angered this man. I felt a little tense as he approached me, but quickly calmed down knowing nothing wrong could happen.

Once he got close, I knew he meant no harm. He looked sad and troubled so I asked him if he needed any help. He handed me the whip and asked me to flog him. It was not a request; he was literally begging me to whip him. I was shocked and at first did not even understand what he meant by it. I asked him again, trying to find out exactly what he wanted.

He replied saying, “Please flog me”. I felt very sad thinking, ‘why on earth would anyone want to be flogged’? I felt totally helpless and did not know how to respond. He kept asking me again and again to flog him. After a brief pause, still in a state of shock I asked him, ‘but why should I flog you?’ for which he replied, “Because I am a sinner”.

I said to him ‘So what if you are a sinner, still why should I flog you?’

The young man said, “Because you are a holy man and if you flogged me I would become holy myself, I would be cleansed of all my sin. The chance of my salvation is certain if a holy man flogged me rather than I flogging myself and I don’t want to miss this opportunity. Please flog me and I will be grateful to you forever”.

I did not know how to stop him from begging me to flog him. I questioned his belief with regards to a judgmental God. I persuaded him to consider the idea of “no sin” and a “non judging God”.

Nothing would stop him from doing what he did. Seeing nothing was working, I started to question his assumption that I was a holy man.

‘You have been told by your friends and your society that you are a sinner and that I am a holy person. The same society has also told you that there is a God who is watching your thoughts and deeds and that you would be rewarded for good deeds and punished for bad deeds. You have accepted every idea, every belief, every dogma without ever enquiring if it could be true. Did you ever ask yourself if it is possible at all that a God so full of Love be cruel at the same time?’

I persuaded him to enquire but the spirit of enquiry had long since died in him. No amount of persuasion helped him reflect or enquire into his beliefs.

I had to tell him very firmly that I could not flog him as I cannot accept the idea of a sinner and that I did not believe in acts of violence to be a means for redemption. I told him that I believed in right actions or wrong actions and not in sin, sinner or a hateful God.

Our conversation ended with one last question for him, “Can there be judgment where there is love? Could love and judgment coexist?”

I could not do much to help this handsome looking young Argentinean other than offer a heartfelt prayer and hope that he would find his inner peace soon. It is such a shame that he had to live in so much misery and guilt wanting to inflict torture on himself, instead of living joyously. I felt very sad and helpless but had to move on with the seminar.

Realizing that this young man had not made much progress during the seminar, I met him again afterwards and had a lengthy dialogue with him where I encouraged him to move into the path of awareness.

We took a long walk in the streets of Buenos Aires where we discussed many things before we finally sat down for a few quiet moments of reflection on the banks of the river Rio de la Plata. It felt like he had made some progress and he looked much happier at the time of our parting. To be honest, I was not sure if he continued making progress. He was so deeply entrenched in his beliefs of sin and a punishing God. It would require a mind that is totally present in order for him not to slip back again into shame or guilt.

I was not able to meet him again because I had to leave Argentina for Tampa, Florida where my next seminar was to be held. However I left Buenos Aires with a big hope that the young man would soon find his freedom.

Enquiring further into the idea of a punishing God

Is it really possible that you can judge someone if you truly loved that someone?

Can there be judgment where there is love?

Reflecting on our own moments of love and hate, we would remember that in those moments of true love, how impossible it was for us to hate another or judge another.

And if you could reflect on those moments when you became judgmental, you would remember that you were hurt, afraid or insecure. Judgment becomes possible only when you act from a place of hurt, fear or insecurity.

When it is so evident from our own life experiences that love and judgment cannot coexist, how come we have projected a divine force that is both loving and judgmental? One cannot understand if it is a misperception or wrong propagation that this sentient benevolent force has to be feared so much. I would like to believe that erroneous perceptions such as this one are a result of improper enquiry and blind adherence.

God can be either love or judgment. He cannot be both. To say he is both is a contradiction in itself. Where there is love, there can be no judgment. To say God is judgmental means to say God is hurt, God is afraid and God is insecure. Obviously this cannot be God, this can only be a false perception of God.

How did we come to accept such a false idea? Is it because we have failed to enquire into our beliefs and dogmas? Is it because we feel safe and certain accepting a belief that many a million have already accepted and adhere to? Is it because we value some psychological security more than Integrity, peace, love and freedom?

A blind acceptance of any view, no matter how profound it may sound, no matter how many millions vouch by it, without an honest enquiry will eventually cause conflict within. Such an acceptance may at the most provide us with some hope and security but it cannot set us free.

No matter how profound any truth appears to be, if accepted in unawareness it could become idealized and may result in conflict. And conflict within will manifest as conflict with out.

If we are aspiring for a world free of division and war, it is important that we end our own inner conflicts first. When we become free of the burden of guilt, only then can we hope to find the much-awaited inner peace. Such love and peace can be found only if one lives a life of awareness

One World Academy is founded on the spirit of enquiry and a culture of awareness. We believe awareness to be the path to Love and the Transcendental Self. It is essential that we practice mindful living if we aspire to live, love and laugh.

One World Academy believes that everyone deserves to live an extraordinary quality of life. Happy individuals make a happy world. To manifest such a world it is essential for one to move from a state of conflict to joy. One World Academy offers various events and workshops to help us make this transition.

Experience One World Academy’s weekend seminar A New Beginning: an extraordinary process of self discovery & freedom with Ananda Giri, Guru Singh and Matthew.