by Timothy B. Lee: Market cap rise above $200 billion could get Musk another huge payday… 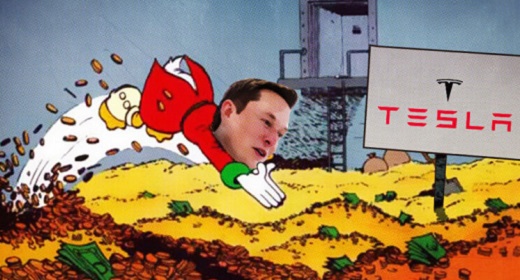 One share of Tesla stock traded for more than $1,130 on Wednesday, pushing the company’s market capitalization to nearly $210 billion. That sent Tesla’s market cap past Toyota, which is worth either $170 billion or $203 billion, depending on how you count it. Tesla is now the world’s most valuable car company.

If Tesla can maintain or expand that lead in electric vehicles—something it hopes to do with the introduction of the Model Y this year and the Cybertruck next year—the company could become one of the world’s biggest automakers (by vehicles sold) over the coming decade or two.

Tesla could also enjoy fatter profit margins than other automakers. Tesla boosters draw a parallel to Apple, which only controls 15 percent of the global smartphone market but rakes in a much larger share of the industry’s profits. While Android phone makers duke it out in a low-margin commodity market, Apple is able to charge a premium to customers who want the distinctive iOS experience.

Like Apple, Tesla is a vertically integrated manufacturer, which allows the company to deliver a unique user experience. And like Apple, Tesla has a fanatically loyal customer base that’s willing to pay a premium for that experience. If Tesla can maintain its mystique as it grows, it could wind up making significantly more money per vehicle than its electric vehicle rivals. And ultimately, Wall Street cares about profits, not the number of vehicles sold.

This is far from a sure thing, however. Manufacturing a car is a complex process—a far more labor- and capital-intensive process than assembling a smartphone. So far, Tesla has struggled to turn any profit at all, to say nothing of printing money like they do in Cupertino. While Tesla undoubtedly has an edge in designing and manufacturing electric vehicles right now, it’s not obvious that this advantage will last as Tesla attempts to scale up its manufacturing capacity by a factor of 10 or more and as rivals pour billions into their own electric vehicle designs.

And that’s what’s truly remarkable about Tesla’s high market capitalization. There’s a real risk that the company will stumble and Tesla’s stock will become worth a fraction of its current value. So investors must believe that the potential upside is large enough to justify this significant downside risk.

Certainly that’s what Elon Musk believes. All of his current compensation is tied to Tesla’s stock price, with the CEO receiving a massive payout each time Tesla’s stock price rises by $50 billion. If Tesla stays above its current level of $200 billion (and the company reaches other revenue or profit milestones) Musk will be eligible for another stock option payout worth hundreds of millions of dollars—in addition to payouts for reaching $100 billion and $150 billion. And Musk will be eligible for additional awards if Tesla’s stock continues to rise—going all the way up to a market capitalization of $650 billion.