How to Align With Your Higher Self – Jonathan Robinson

by Jonathan Robinson: Once a person learns to listen to their intuition, they need to avoid the trap of simply waiting to be “told” what to do in life. 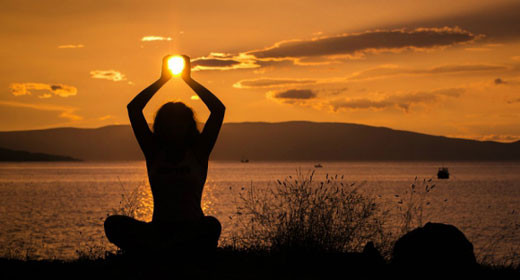 While intuitive guidance can be a great tool for discerning what you should do, it becomes even more powerful when it is used in combination with taking consistent action. In fact, intuition and action are meant to work together to help you pinpoint what your Higher Self is calling you to do. To show you how these two can work together, let me use an analogy.  Remember the hot and cold game you used to play as a kid? Someone would hide an object, such as a pen, and you would try to find it. Whenever you got closer to where it was hidden, they’d say you’re getting warmer. When you veered from its hiding place, they’d say you’re getting colder. Eventually, you’d get “red hot” and would find the hidden object.

I believe God is really playing the hot and cold game with each of us. God–or the universe–is continually sending us both intuitive and external messages as to whether we’re in alignment with our Higher Self. There are two ways such messages are communicated to us. The first way we can know if we’re on the right path is by listening to our intuition.  If, upon asking for internal guidance we sense that something  feels right or true, that’s a message that we’re getting “warmer.” On the other hand, when something doesn’t feel right, or is somehow unclear, that means we’re getting cooler. It’s time to re-evaluate the direction in which we’re going.

The second way we receive messages about how we’re doing is by the external feedback we get.  For example, if you share your feelings with your partner and they tell you how much they appreciate you, that’s a good indication you’re on the right path. On the other hand, if you talk with your mate and they get irritated and upset, that can be an indication there’s something off course. Either there is something wrong in your relationship or something amiss with how you express yourself.  By listening to the inner and outer messages the universe sends your way, you can soon learn to steer yourself to the treasure that awaits you—being in alignment with your Higher Self.

When I began my career, I used a different technique for trying to figure out what I should do. I thought that if I meditated enough, God would speak to me in a booming voice and tell me exactly what I was supposed to do. I call this the “Moses model” for aligning with the Divine. Many spiritually inclined people believe that God will one day speak to them in a distinct manner and say, “You need to go this way!”  After all, that’s what He did with Moses, so why not with you and me?  Actually, God didn’t do that with Moses. Moses had to stumble along for many years on his own before he received direct and clear guidance from Spirit. I believe that we have to do the same thing. Only after a long time of listening to the hot and cold feedback we get from the universe does it become fully clear what God wants us to do.

I would like to say I’ve learned my lessons and am now done with the universal hot and cold game.  Such is not the case. When my second book came out, The Little Book of Big Questions, I intuitively felt that I didn’t need to promote it. Then my linear mind kicked in and told me I had to promote it or no one would ever hear about it. Over several weeks I managed to call over 300 radio and newspapers about my book—hating every minute of it. To my amazement, not a single person responded. The universe was practically screaming at me, “You’re now freezing.”  Realizing I was off course, I went to a friend for guidance. She suggested I read the book again and get in touch with how valuable it is. She also suggested I don’t try to promote it, but instead ask my intuition if there is any fun way I might let others know about the book.

While in meditation, I got the idea that, on Christmas Day, families could use the questions in my book as a way to talk about spiritual topics and keep the spirit of Christmas alive.

I made a single call to CNN about this idea, and they loved it. They interviewed me for a full 15 minutes about the book.  The interview went extremely well.  Then, the producers at “Oprah”saw this interview and decided to base an entire show on the questions in my book. With a single well-placed call and idea, my book now soared rewarding than trying to push through our own agenda.

As spiritual beings, we have a subtle balance to maintain. One part of our task is to take a lot of action, learning from the feedback we receive—as in the hot and cold game. The other part of our task is to take action inspired from a deeper place within ourselves. In the above example, I took a lot of action, but it wasn’t in line with my intuition. Therefore, the results were not good.  Finding the right balance of intuition and action is an ongoing process. Yet, there are signs indicating when you’ve veered too far towards either side.

A sign that you’re living by the “Moses model”–meaning you’re not taking enough action–is that nothing ever gets accomplished. Taking action and failing is better than never taking any action at all.  We’ve all known people who have grandiose visions of what they’d like to create, but never seem to do anything but dream. It’s a shame because their ideas may be great, but they lack the “strength” to manifest their dreams. People like this need to dive into learning by action, making a few wrong turns, and becoming wiser from their efforts.

On the other side of the fence are people who are always taking action, but who never listen to what their soul is saying. They get a lot done, and sometimes even rise to the top of their industry. Unfortunately, their feeling of dissatisfaction is evidence that they are off course. Taking action predicated only on the desire for personal profit is damaging to one’s soul, one’s relationship with other people, and even damaging to the planet. It is only when we strike the right balance of taking massive action, guided by God’s will as best as we can discern, that we can accomplish our dreams and have a good time doing it.  By listening to intuition and to the feedback received from taking massive action (the hot and cold game), over time we can know what we’re here to do and align ourselves with our Higher Self.  Although it can be a long journey to find that perfect alignment, when it happens, it’s pure magic.

Jonathan Robinson is a psychotherapist, best-selling author of 12 books, and a professional speaker from Northern California. Mr. Robinson has made numerous appearances on the Oprah show, as well as many other national TV talk shows, and articles about him have appeared in USA Today, Newsweek and The Los Angeles Times.  For the past 30 years he has spoken to dozens of Fortune 500 companies including Google, Microsoft, Dell Computer, Coca-Cola, and Fed-Ex.

Jonathan has written several bestseller books including, “The Complete Idiot’s Guide to Awakening Your Spirituality;” “The Experience of God,” “The Little Book of Big Questions;” and “Communication Miracles for Couples.” His latest book is called, “More Love, Less Conflict.” Jonathan also co-hosts the podcast “Awareness Explorers” with author Brian Tom O’Connor. This podcast focuses on revealing the easiest and most powerful practices for directly awakening to one’s true nature.

Through TV, live lectures and radio, Mr. Robinson has reached over 100 million people around the world.  He is known for providing his audiences with immediately useful information presented in a fun and entertaining manner.