by Donna Quesada: A mantra is a sacred word, sound or phrase, which is part of the Bhakti Yoga tradition. Bhakti means love, or devotion. 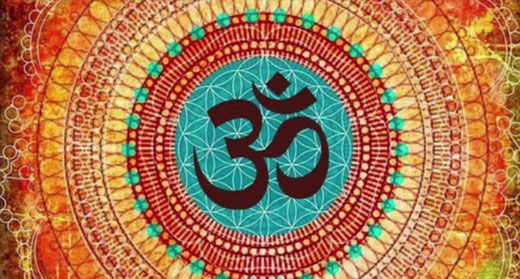 In the western mind, devotion conjures up the idea of subservience. But it is rather, the unfolding of the connection with spirit. Bhakti is the pathway to the divine by way of the heart. I believe it would be better translated as connection, which is at the heart of what all of Yoga has ever been about… to connect to God.

As the American spiritual teacher, Ram Dass put it, “music has a unique ability to convey emotion, and when it combines with the vibrational quality of a mantra, there is nothing like it to bypass the mind and open a direct route to the heart.”[1]

Chanting is a direct connection with God. ~ George Harrison

One of the central mantras in the practice of Kundalini Yoga—the form of Yoga I was trained in—is Ek Ong Kar Sat Nam Siri Wah Hey Guru, which means, The Creator and the Creation are One. This is our True Identity. The ecstasy of the experience of this wisdom is beyond all words and brings indescribable bliss. The first time I experienced the bliss of chanting was while chanting this mantra. I felt my whole core vibrating, and didn’t want it to end, but the more you chase it, the quicker it flutters away, like a delicate butterfly. This mantra evoked within me a blossoming of love that felt very different than the chanting I had known before—as different as a true love’s kiss is from all others.

And in the experience of group chanting, called kirtan, the vibration of the voices in sync magnifies the experience. As all the genuine spiritual traditions remind us, it is through the release of letting go that wisdom is attained. In subtle paradox, it is by losing that we gain. The first time I experienced kirtan, I felt that it was not merely our voices that we offered up to the infinite, but our very sense of self. I remember a moment when someone’s outstretched leg extended in front of my own, while mine stretched out in front of someone else’s. Together, we all carried on, and for the duration of the chant, our bellies pumped air as one rhythmic body, like some multifaceted breathing apparatus. We were a woven cloth. For a time, personal space melted away, along with the usual sense of separateness that keeps us from our own divinity.

Every time I chant a mantra, I feel that the sacred sound is like a ribbon wrapping me in love and inner peace. Whatever worries I have circling through my mind tend to evaporate, as imperceptibly as the morning dew melts off the plants once the sun is up. Reflecting on all those days I had stayed home “sick” as a girl, just to sing along with my favorite record albums, I came to feel that I had come home to my true practice. I had given up my singing aspirations upon realizing that I was not a gifted singer, but now I see that I came back around to it in the way I was supposed to—in the form of chanting.

It is understood in all forms of Yoga that we have a central energy channel that runs along our spine, known as the sushmuna, by which the Kundalini energy flows. This energy is our life force, it is consciousness itself, and to awaken its flow is to awaken the divine spark within us. The practice of mantra meditation is at the heart of Kundalini Yoga. It is said that when we chant, we vibrate that central channel, as well as every cell in our body, as long as we are chanting from the heart and with the belly.

It is said that there are three components to chanting effectively: projection, pronunciation and repetition. Vibrating the sound as we chant from our hearts is our projection. Pronunciation comes into play through the way we enunciate the mantra. When the sacred sounds are emitted, the tongue taps certain points along the roof of our mouths, sending signals to the hypothalamus, which in turn, regulates the chemical activity streaming into all parts of the brain and body, which affects everything from moods to appetite to sleep.

Through the technology of sound, we heal ourselves. The nervous system is affected in a way that tells us everything is alright – and as the effects are multiplied, the healing response is triggered and it all translates into wellness of the mind, body and spirit. The process of correctly pronouncing a mantra might be likened to tapping the keys of a piano–inside the casing, a hammer bounces up and strikes the strings which are tuned to produce a specific and foreseeable note; behind the curtains a remarkable vibratory process is going on.

Repetition calls forth the pulse of the universe—the underlying, rhythmic flow that reverberates through all of life.  A mantra is not a word, in the everyday sense, but rather, a sacred sound. In many traditions, it is said that the name of God is no different from God himself or itself or herself. The sacred sound in the form of a mantra is God permeating our being through sound.

And thus, though these three keys, projection, pronunciation and repetition, we heal ourselves physically and emotionally and uplift ourselves spiritually.

How to do it

Inhale deeply, hold the breath, and focus at the Brow Point for several seconds, then exhale and relax.

These eight syllables are like a special “code” or a password that connects you with that divine part of you, called the infinite. Some people call it God. My teacher used to say that we could attain this state of ecstasy by chanting certain mantras, like this one, everyday, for 40 days—especially during the early morning, known as the “the ambrosial hours.” Try chanting for 11 minutes and work your way up from