Donna Quesada: Let’s get into the thick of it. For those that don’t know what is behind the idea of the food pyramid, 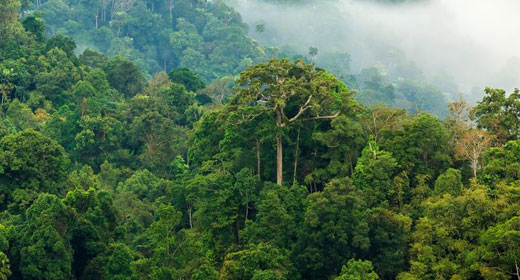 which you take on, in Diet for A New America… You reveal it to be propaganda, not education… Is this still true today, and what will it take to get out from under this propaganda? Is it political? Is it psychological? Both?

John Robbins: Both, definitely. And yes, the meat industry, the dairy industry, all the big food industries. The sugar industry, the processed food industry… they work together in something called the Grocers Manufacturing Association. That is one of their trade lobbies. Also, the Agri-chemical industries. And the bio-tech industries. They all have an enormous investment in the status quo. In the way that we are currently producing food. It’s a terrible way to do it. It’s not producing healthy food. It’s producing inexpensive food for the consumer that is tasty. And it is undermining their health. Undermining the health of all of us who eat it. Dramatically so. Today, if you reach the age of 85 in the U.S., you have a more than 50% risk of having dementia. Having Alzheimer’s at the age of 85. Greater than 50%. And yet, we know that if you eat a different diet and have a different life style, your odds go from over 50% to under 5%.

JOHN: You don’t have to get it. We see older people getting it and it’s sad, tragic and very costly. And it’s costly to the whole family, because there is so much care taking involved. And it’s so tragic. My mother died of Alzheimer’s.

DONNA: My grandmother had it. It’s horrible.

JOHN: It’s terrible and it’s preventable. Even if you have the gene, which predisposes you to heightened risk, you don’t have to get it. You have slightly increased odds, so you eat well and you live a healthy lifestyle. And instead of reducing it to 5%, if you have the gene, you reduce it to 10%. And if you have two AP40 genes, which is currently thought to make it inevitable… 100% likelihood. And, it may be that if you have both, that you are going to get Alzheimer’s, but, if you eat a healthy diet, then you will postpone the time of onset by 15 to 20 years, and that is really substantial. That’s a big deal.

DONNA: Of course. You might die of other causes before it ever sets in.

DONNA: So, this is the health dimension. I always think that it is kind of in three parts because we have the health dimension, that is related to our diet. We also have the environmental pollution and degradation. And I think that this is where we are in the dark, as a people. We think that if we drive a new car… a different kind of a car, that we are going to solve the problems with deforestation. And please tell me if this is true… that a meat-based diet is a more significant culprit than the transportation industry… Is that true? And for those that don’t know this, can you explain the connection between diet and the environment?

JOHN: It is true, and changing your transportation is important. People who drive hybrids, or if they can afford them, Teslas… who care about the gas mileage… they are getting… are doing a good thing. But some people at The University of Chicago did a very careful analysis and came to the conclusion that someone who eats a plant-based diet and drives a Hummer (terrible gas mileage) has a lower carbon footprint than someone who is eating meat and driving a Prius or a Tesla. So I’m not saying you should drive a Hummer or a Ferrari, if you care about the planet. But I am saying, we have to do everything we can. And the potency… the power of what we chose to eat, for the environment, to our carbon-footprint, to our ecological footprint, in all ways, is massive.

DONNA: How can this be? For someone watching, how does what I eat affect the environment? What is the mechanism in place here? What’s the chain of events? If you could and would?

JOHN: Well, there are several. One, you mentioned rainforest before. And we are destroying the rainforest to create land, on which to graze cattle. Or, to create the land to create soy beans to feed the cattle.

And we are destroying the carbon sinks of the planet. Then, that carbon goes into the atmosphere. And then we have more global warming. And we have more acidification of the ocean. And also, the enormous amount of wildlife habitat that is being destroyed in order to graze cattle… in order to produce cattle feed. And animal feeds, in general. That is one of the primary drivers of the extinction of species. The Institute for Biological Conservation has come out with a very strong statement against meat eating. On behalf of the species on this planet. On behalf of preserving life on this planet. We don’t even know most of the species we are driving to extinction. We don’t even know who they are, what they are, what role they play… But you can be sure that they do play a role for the health and well being of the whole.

Decimating species in order to have cheap burgers. Destroying rainforests in order to have cheap burgers. For a people whose cholesterol is too high. We are suffering from heart disease and other illnesses we know to be caused by eating too many animal products, particularly factory farmed ones. What sense does it make? It makes no sense at all. It’s literally insane. You can come at this because you care about the environment. The UN did a study on greenhouse gas emissions from different sectors globally, and they concluded that the livestock sector was responsible for more emissions than the transportation sector. This means that producing food products from animals has a bigger carbon footprint than transportation. Cars and trucks and planes and ships. World wide. Not to say that is not important to address, but we can change what we eat, easily. To change the energy system… to put up windmills and solar panels sufficient for our energy supplies… That’s a very costly undertaking. We should do it. We should do it immediately. It’s imperative that we do it. And yet, it doesn’t cost anything to eat vegetables instead of meat. And you live a healthier life. You don’t have the same medical costs. You’re happier. Your mind is clearer for the duration of your life. You have more calmness and emotional stability. You can respond to difficulties with more equanimity. More competence. You feel better about yourself. You are more inspired by your experiences. You have more inspiration in your life. You have more beautiful thoughts. You think more deeply. You are in a relationship with other people and the world of joy and generosity versus taking and selfishness and short-sightedness.

DONNA: And violence and pain. And yet, those organizations that we think of as the guardians, seem to also be involved in hypocrisy, or naïveté, or not wanting to take it on. Have you seen the documentary Cowspiracy?

DONNA: It’s mind blowing. Because apparently the guardians of the environment aren’t putting this forth with the urgency that it merits. Why is that?

JOHN: Well, they are starting to and I want to acknowledge that. They are doing more all the time and I appreciate that. Hasn’t always been the case. When I wrote Diet for A New America… when it was first published, I was invited to give a key note speech at an annual dinner at The Sierra Club, and also at Greenpeace. And in both instances, I said I would be happy to do that for them and be part of their fund-raising activities, but I wanted the dinner to be plant based. And they both balked at it. They said they didn’t want to alienate their big donors. And I thought, wow. Your big donors look to you for guidance. They are busy making money or doing what they are doing with their lives. But they love you and they love what you should be about. And they want you to take leadership. If you kowtow to the lowest denominator… if you play it safe like that and don’t risk expanding to where your real potency lies as an environmental organization… to my eyes, you are selling yourself short and you are selling your donors short.

DONNA: Did they change the menu?

JOHN: Well, every instance was its own story. There were individuals involved and I won’t go into the details. But I mention it because in those days, as Cowspiracy documents, a lid on environmental groups mentioning this topic… it’s pretty much been taken off today. Far more groups are recognizing… There have been many reports saying that if we want to be serious about reducing our carbon footprint and having a lower ecological footprint,in general, the most potent thing we can do is eat less meat. Less factory farmed meat. It’s really nice to know where your potency is. Your power.

DONNA: That would have been an opportunity to show how delicious a plant-based diet can be.

JOHN: And in those cases, where they didn’t change the menu… I didn’t show. And I didn’t do it. They missed an opportunity. But some of them did and over the years, as I’ve been invited to deliver more and more of these key notes, I have found the organizations more and more receptive. And now, usually I just have to confirm that the dinner will be plant-based. So, we are seeing growth and change. It’s slower than I’d like, of course. But I do want to acknowledge it because if we can recognize the good in people there will be more of it.

John Robbins is the author of the international bestseller Diet For A New America: How Your Food Choices Affect Your Health, Happiness, and the Future of Life on Earth.

The Food Revolution:How Your Diet Can Help Save Your Life and Our World

Healthy At 100: The Scientifically Proven Secrets of the World’s Healthiest and Longest-Lived Peoples

The New Good Life: Living Better Than Ever in an Age of Less.

The Awakened Heart: Meditations on Finding Harmony in a Changing World

Reclaiming Our Health: Exploding the Medical Myth and Embracing the Source of True Healing.

May All Be Fed: Diet For a New World