by Steven Taylor: A few years ago, feeling serene and exhilarated after a meditation, I decided to go for a walk… 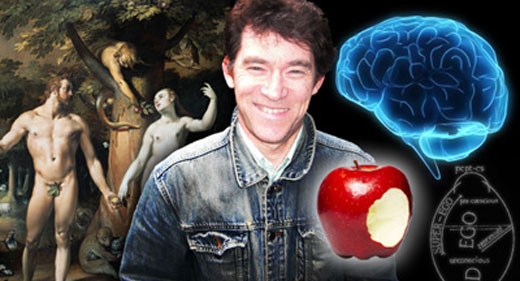 It was a beautiful evening – clear blue sky beginning to get dark, orange where the sun was going down, a few stars beginning to shine through. I walked around the field near my house several times, looking at the sky, amazed at how beautiful it was. My mind was quiet and I felt full of vitality. I began to feel as though I was being engulfed in the sky, and my normal sense of space was changing. The sky didn’t seem ‘up there’, it seem to be around me, a part of me. I felt that the blue black space around me was alive, that the universe was a living being. Every time I stared at the sky, the feeling grew stronger. It only stopped when my mind started thinking again.

Most of us have experiences like this from time to time, when the world becomes more real and beautiful. Natural phenomena like trees, rocks and the sky become alive, and reveal their inner being to us. An atmosphere of harmony seems to fill our surroundings, which may intensify into a radiant energy or ‘spirit-force’ which pervades all things. We feel a tremendous sense of well-being and the world becomes a benevolent and meaningful place. Our normal sense of separation fades away; all things seem related, as if they’re expression of one essential oneness, and we feel a part of this oneness too.

These experiences are sometimes referred to as ‘higher states of consciousness’ or ‘spiritual experiences’. However, in my book Waking From Sleep, I suggest that rather seeing them as transcendent or ‘higher’, we should see them as natural. I believe these experiences represent a way of seeing and relating to the world which was once normal to human beings, but which we have lost.

It’s possible to see normal human consciousness as a kind of ‘sleep’ which we wake up from in these moments. Most people are asleep in the sense that their perception of the world is automatic, so that they aren’t able to sense the is-ness and alive-ness of our surroundings. They’re also asleep in the sense that they see all things as separate to each other, and experience themselves as separate entities, as egos enclosed in their mental space with the rest of the world ‘out there.’ Seen through this state of consciousness, life seems meaningless, and the universe may appear an indifferent and even hostile place.

This state of consciousness is extremely dangerous, and can be seen as the root of our species’ reckless disregard for the environment. Since we see the natural world as inanimate and as something other to us, we have no qualms about abusing it. We see it as nothing more than a supply of resources to use for our own for our own devices, without responsibility.

However, I believe that this state of sleep is really a psychological aberration, and that it is actually natural and normal for us to be ‘awake.’

For example, many of – if not all of – the world’s indigenous peoples, experience this ‘spiritual’ vision of the world as a normal, everyday state. This heightened perception is one of the reasons why they have such a reverential attitude to nature: they sense that rocks, soil and rivers are alive, with a being or consciousness of their own. As the Cherokee Indian scholar Rebecca Adamson points out, for indigenous peoples ‘the environment is perceived as a sensate, conscious entity suffused with spiritual powers through which the human understanding is only realised in perfect humility before the sacred whole.’ The Hopi use the term Novoitti for the concept of living in harmony with nature, while the Tlingit (also of North America) call it Shogan.

Similarly, it seems that indigenous peoples don’t experience the kind of sharp duality between themselves and the world which is our normal state. They feel a strong sense of connection to nature, an awareness that they are a part of the web of creation (and one which is no more important than any other). As Tim Ingold writes of the Batek Negritos of Malaysia, for example, ‘They see themselves as involved in an intimate relationship of interdependence with the plants, animals and hala’ [spirits] (including the deities) which inhabit their world.’

However, we have all glimpsed this natural spiritual state in our own lives too, even if we don’t remember it: when we were young children. Young children are awake to the is-ness and radiance of reality in the same way that indigenous peoples are. In fact, this is one of the best things about having children: they teach us to see wonder in the world again. They have an insatiable curiosity, are amazed and fascinated by all kinds of ‘mundane’ things which most adults take for granted and scarcely pay any attention to. Their experience seems much more real than ours, so that the world appears a much brighter, more colourful, complex and beautiful place. As the developmental psychologist Alison Gopnik puts it, ‘I believe that babies and young children are actually more conscious and more vividly aware of their external world and internal life, than adults are…I think that, for babies, every day is first love in Paris.’

The Loss of Natural Wakefulness

All of this begs the question: if this state of ‘wakefulness’ was once natural to us – both as individuals and perhaps as a species – why do we (and did we) we lose it?

The answer is the same in both cases. As a species, we lost this state because of the over-development of the ego. At a certain point in our history, we developed a heightened sense of individuality, and began to experience ourselves as egos occupying the space inside our heads, with the rest of reality ‘out there’ (I describe how and why this development occurred in my earlier book The Fall). As well as creating a disconnection between ourselves and nature, this ego began to monopolise our psychic energy, so that there was less energy available for us to devote to perceiving the is-ness of the world. Our attention was ‘switched off’ to the phenomenal world in order to fuel the ego’s functioning.

And this is also what happens as we grow into adults. Young children don’t have a strong sense of ego, which is why they are awake to the is-ness of the world and feel a sense of connection to it. But gradually, as the ego becomes more developed, we ‘fall’ into separateness and automatic perception. The world which was once so full of wonder becomes a separate, shadowy, half-real place.

However, human beings have always felt instinctively that our normal consciousness is limited and striven to attain temporary higher states of consciousness – or as I call them, ‘awakening experiences.’ Throughout history people have used a variety of methods to do this, including fasting, sleep deprivation, psychedelic drugs and meditation. Sometimes awakening experiences happen accidentally, through contact with nature, playing or listening to music, playing sports, or during sex. All of these activities can give us access to the world of is-ness, meaning and one-ness which is normally hidden from us.

Over the years, I have collected hundreds of examples of these experiences, from friends, acquaintances, students and strangers. Nature is one of the most common triggers of the experiences. Here, for example, a student of mine describes an experience she had while swimming in a lake in a Canada:

I felt as though I was the only person there, the only person in the world. I swam out as far as I could, to the middle of the lake and just looked around, treading water. I could see no houses, no people, no cars or roads. I could hear no noise, just may arms splashing. I felt completely alone, but part of everything, I felt at peace. All my troubles disappeared and I felt in harmony with nature. It only lasted a few minutes but I remember the sense of calmness and stillness and it soothes me now.

Dancing is another common trigger. For example, here’s the experience of a friend of mine who used to be a Morris Dancer:

We were dancing outside on a beautiful day, surrounded by the hills. As we were dancing I started to feel as if it wasn’t me who was doing it anymore. I didn’t have to think. It was just dancing me, and it was the best I ever danced. I felt like I was just a channel for the music. Everything fell into place with the other members of the group. We weren’t individuals anymore, we were whole body of six people. There was no division between us. I felt an expansion of awareness into space. I was dancing in the space in the middle of the hills. I was part of this vast background.

Awakening experiences have two basic sources. They can be caused by a dramatic change to our normal physiology or brain chemistry, which is why fasting, sleep deprivation and drugs can cause them. They can also be caused by what I call an ‘intensification and stilling of life-energy,’ through meditation, yoga, general relaxation, listening to music etc. This happens when our minds become quiet and still, and when we’re inactive and relaxed. We conserve energy that we normally expend, and so life-energy builds up inside us, filling us with a sense of well-being, and fuelling our perceptions, so that we look at the world with more intense and fresh vision.