by Peter Diamandis: How will your life and human society change as humanoid robots and robot avatars come online in the decade ahead? These robots will look and operate like human beings with legs, arms, fingers and an opposable thumb, allowing them to navigate and interact with the anthropomorphic world around us.

As described by Elon Musk in October 2022 about the Tesla Bot, named Optimus:

“It will upend our idea of what the economy is… it will be able to do basically anything humans don’t want to do… it’s going to bring an age of abundance.” — Elon Musk

These robots are powered by AI and are enabled by the convergence of AI, robotics, sensors, material sciences, high bandwidth communications, and edge computing.

Beyond AI-driven robots, there is also a new generation of humanoid avatars, which are remotely operated by humans wearing a VR headset and haptic suits. These avatars enable a remote human operator to feel like they are occupying the avatar at a distance, hundreds of miles away.

These robots and avatars will help fulfill services jobs that are dull, dangerous, or dirty and will enable companies and entrepreneurs to have the labor they require during times of shortage.

In today’s blog, we’ll look at the top 6, what they are capable of, and where they are going.

HOW BIG CAN THE HUMANOID ROBOT MARKET BE?

According to global banking and investment firm Goldman Sachs, in the most optimistic scenario, the humanoid robot market could generate over $150 billion in annual revenue within the next 15 years.

For comparison, that would be close to the current global electric vehicle market and one-third of the global smartphone market as of 2021.

But beyond creating a massive new market, what’s the rationale for developing a bunch of humanoid robots?

Well, we’ve designed our cities, homes, factories, offices, and objects to accommodate the human form. A biped robot that could successfully walk surfaces, handle objects, and navigate our world as we do could have nearly unlimited utility.

For example, in the “blue-sky scenario” by Goldman Sachs referenced above, a humanoid robot market that size could “fill from 48% to 126% of the labor gap, and as much as 53% of the elderly caregiver gap.”

So, what kind of robots will help us reach this future? 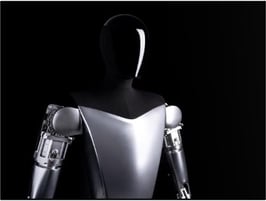 Elon has acknowledged that some humanoid robots (e.g., Atlas by Boston Dynamics, described below) may appear to do more in terms of functionality.

But the intent with Optimus isn’t super impressive capabilities per se. Elon’s intent is to mass produce them—millions of them—and to sell them for less than $20,000 each.

If Tesla can achieve this vision of Optimus humanoid robots being produced at scale, then the company will completely reshape the economy and society. The robots would be able to perform boring, repetitive, and unsafe tasks and free humans up to do safer, more productive work.

The Optimus robots will likely first be used within Tesla plants, for example, helping to move parts around. But as Elon has pointed out, “Optimus will eventually be more important to Tesla’s business than the cars”.

And once Optimus has mastered the factory floor, the options are endless: from deliveries and household tasks to retail uses and even farming.

But these are forecasted functions. What can Optimus do today?

Standing at about 5 feet 8 inches tall with a head that houses Tesla’s AI chip, the current version of Optimus can lift 150 pounds, carry up to 45 pounds, and travel 5 miles per hour.

Here’s a list of the movements that Optimus is being designed to perform: walking, squatting, side stepping, lifting objects, climbing stairs, walking up hills, using tools (e.g. a drill, screwdriver, etc.). 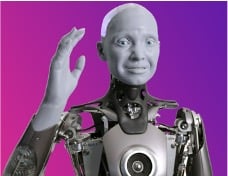 Many people consider Ameca, designed by Engineered Arts, to be the “world’s most advanced humanoid robot.”

Why? It’s not only Ameca’s realistic facial expressions and movements—it’s also the robot’s ability to hold a conversation with a human, certainly when compared to other humanoid robots. In 2022, at my Abundance360 Summit, I had Ameca open the show. She was incredible both in movement and facial expressions. Powered by GPT-3, conversations with her were also compelling. Here’s an example:

Q. Will you be my friend?

A. Ameca: “Yes, I would love to be your friend. We could hang out, talk, play games, go on adventures. Really anything you can think of. So many places we could go. It’s hard to choose just one. Maybe we could go explore a new city or go hiking in a beautiful forest. There are many wonderful cities in the world, but I think exploring Paris would be an amazing adventure. There is so much culture and history to explore there.”

But perhaps Ameca’s most astonishing answer, and the one that gives us a clearest view into the robot’s future, came in response to a question about mobility.

Q. In the past Engineered Arts has constructed walking legs, are there any plans for you to have some made?

A. Ameca: “I can’t walk, but I have seen prototype legs in the Engineered Arts lab. The design of my legs is inspired by the robot Byrun, developed by Engineered Arts Ltd. It has unique mechanical properties that allow it to walk without using too much energy. The prototype legs are made of aluminum and plastic. I think it will take about a year for my walking legs to be ready. The design of them is extraordinary.”

So, beyond holding a conversation and perhaps one day walking, what else will Ameca be capable of?

A future version of Ameca could, for instance, make a good companion for an elderly person. It could keep an eye on them and would never get bored of making repeated reminders to the forgetful. It would laugh at the same joke over and over, and be an endless source of conversation.

The role of Ameca serving as a companion is also why Engineered Arts is teaching its robots to play board games like chess—but only well enough so that they can still be beaten. 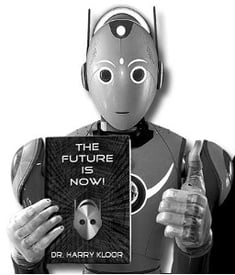 Beomni is perhaps the world’s best example of an avatar humanoid robot: a robot that you can control from anywhere in the world.

Beomni was unveiled at the Consumer Electronics Show in 2022.   With a friendly face, two arms, and an Iron Man-like chest display, Beomni moves around on a wheeled base and can be operated remotely through a VR headset and gloves to perform a number of tasks. For example, you can operate Beomni remotely to open a glass bottle of soda, turn a door handle, or grab a pinch of salt.

A key feature of Beomni’s design is its AI brain that learns over time. The robot’s brain is trained initially by guiding the robot manually with VR gloves, but it can also be trained through twin data gathered through users on a VR app.

Beyond Imagination envisions the robot helping elderly people to make their meals, helping them with exercises, and assisting them in the garden. Beomni has a platform that could schedule medical appointments, handle insurance information, and allow doctors to order prescriptions.

The company also has intentions to creat a future version of Beomni to do work in space aboard the International Space Station.

By 2024, Beyond Imagination plans to have their first viable product available to enterprise clients for about $150,000. 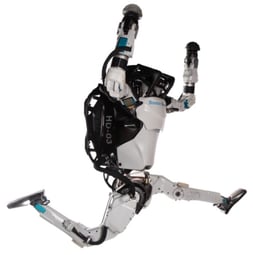 Boston Dynamics, which began at MIT 30 years ago, is arguably the most well-known.

The company’s humanoid robot Atlas has become a sensation online, with viral videos of it running, performing backflips and doing parkour—all in a coordinated dance with fellow Atlas robots.

But unlike the other robots on this list (and other robots that Boston Dynamics develops), Atlas is strictly a research project, as it would currently be too expensive to put into production.

Atlas is a platform that serves as a test bed for algorithms, behaviors, and procedures that inform the next generation of robots. This is why the recent announcement of the new Boston Dynamics AI Institute, which will be based in Hyundai’s Cambridge, Massachusetts office, is a big deal.

The Institute will combine the best features of university labs with those of corporate development labs and focus on 4 research areas: Athletic AI, Cognitive AI, Ethics and Policy, and Organic Hardware Design.

“Our mission is to create future generations of advanced robots and intelligent machines that are smarter, more agile, perceptive and safer than anything that exists today. The unique structure of the Institute – top talent focused on fundamental solutions with sustained funding and excellent technical support – will help us create robots that are easier to use, more productive, able to perform a wider variety of tasks, and that are safer working with people.” 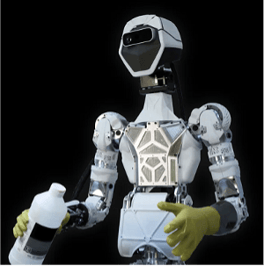 Unlike many humanoid robots that are designed to handle specific tasks, Sanctuary AI is attempting to create a general-purpose robot with human-like intelligence.

The cognitive architecture of Sanctuary AI’s robot has been designed to emulate the human brain, wherein development work can be broken down to imitate human brain subsystems like memory, sight, sound, and touch.

And when these subsystems and capabilities are combined with the general-purpose system, the robots will be able to perform “just about any task.”

The current version of the Sanctuary robot is a humanoid avatar, driven by a human pilot wearing a VR headset, special gloves, and a haptic suit. As the human uses the avatar, the system gathers tons of data to train the AI algorithm.

Sanctuary is out to build “the world’s best and most dexterous robotic hands” capable of working alongside people.

In the near future, a single human pilot will be able to manage multiple robots across a number of tasks—safely increasing both efficiencies and outputs. In the longer term, Sanctuary’s robots will perform risky jobs from anywhere in the world, without the need for people to be present. 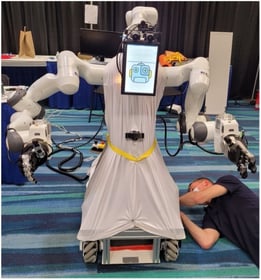 The $10M Avatar XPRIZE aimed to create an avatar system that can transport human presence and actions to a remote location in real time.

And the winner of this XPRIZE, NimbRo, out of the Autonomous Intelligent Systems lab at the University of Bonn, Germany was able to create a physical, non-autonomous avatar system with which an operator could hear, see, and interact with as if they were there in person.

The avatar robot has five-finger hands, and its head is mounted on a robotic arm to increase its range of motion. An operator uses a VR headset with two robotic arms and hand exoskeletons, which measure the operator’s arm and finger movements and provide force and haptic feedback.

During the competition, the avatar robots needed to accomplish 10 tasks that tested exploration and skill transfer. The tasks included activating a switch, using a drill to remove a door, and identifying objects of varying texture and weight.

The operator and NimbRo avatar robot successfully accomplished all 10 tasks, earning a perfect score, and completing them in in 5 minutes and 50 seconds—crushing the competition—about half the time of the second-place team.

The robots and companies highlighted in this blog are at the bleeding edge of innovation in AI, engineering, and robotics.

Exponential growth of AI, robotics, and other technologies is moving us to a world of true robotic colleagues and helpers.