by Donna Quesada: An oft-asked question from students: Wouldn’t following the Buddhist teachings of detachment lead to a dull and boring life? 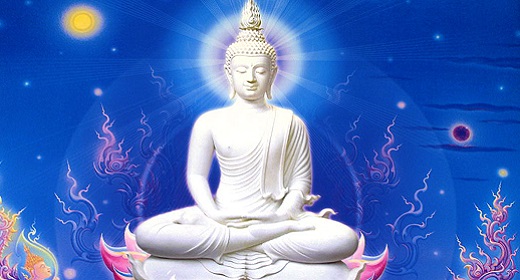 How so? Maybe because Buddhists tend to talk about stuff like acceptance and finding equanimity. They talk about accepting the situation, come what may, without getting caught up in one’s own ego-based agenda and the disappointments that naturally follow when that agenda isn’t fulfilled. It means not acting for the sake of what’s in it for us, which also means unclenching our fist of the desires held therein. Letting go of attachments is also in a sense, letting go of what is often thought of as passion. So, I can see how dispassion might, at first glance, conjure up the image of some numbed out whack on quaaludes. A student actually asked if living “the Buddhist lifestyle” would be like taking Prozac, since in his mind, it would be a flattened life without the manic highs and lows that are seen as normal today. Nonattachment is seen, from this perspective, as being disengaged in life.

But as the picture of Hotei, the Chinese laughing Buddha attests, one can follow the Buddhist teachings of letting go, and still relish and savor every moment, perhaps more so because of the Buddhist’s intimate understanding of impermanence. Knowing that life and everything in it is ephemeral, makes it even more precious. And always trying to remember to be mindful of this evanescent bubble of activity we call life, the Buddhist, or whoever may be moving toward “the Buddhist lifestyle,” would relish with gratitude and delight, every passing moment. He would absolutely party it up like Hotei. That is, if going around barefoot with your belly hanging out of your open robe, while schlepping a bag of trash over your shoulder on a stick is your idea of living.

The reality is that Hotei’s ebullient joy comes from the inside rather than the outside. His happiness doesn’t depend on that ego-based program being satisfied, on the fulfillment of his 672 desires, and isn’t pending the condition that all things go as he previously invisioned. Far from dull, he has a good time in life because if it rains he can go barefoot-splashing, and if the sun is shining, he can tan his big belly, and enjoy both just as well. That’s the kind of guy you want at the party.

Alas, most of us mortals are tied up, strangled by what my teacher calls the picking and choosing mind, the one that has us ultimately knotted up in anger and frustration because the world didn’t do what we wanted it to do. Will it ever? The one that has us restlessly chasing after endless desires, hungering after this and itching for that because we can’t be content without them, we need them, and we’re jealous and resentful when others have what we don’t, whether it be actual stuff, or the more elusive fixations like power, prestige, recognition, beauty, and youth. These are what Buddha meant by The Three Poisons: greed, anger, and ignorance. Our suffering and the barbarity in the world are the weeds that grow from these three poionous seeds.

And so, from this perspective, happiness is less about gratification, and more about freedom from the conditioned belief that life is not liveable or fun without certain things. And it is freedom from the moodiness that follows when the appetites aren’t fed. As Paramahansa Yogananda says, this constant thrill-seeking only nurtures the restlessness and the habit-behavior that keeps us trapped, because like any addiction, the habit needs continual sustainment and is driven by the emptiness, pain, and boredom that inevitably come when the thrill is over. Happiness in this way, is freedom from that trap.