by Marianne Williamson: Over the past few years, there’s been an increased emphasis on mental health issues, and just last Saturday, it was World Mental Health Day… 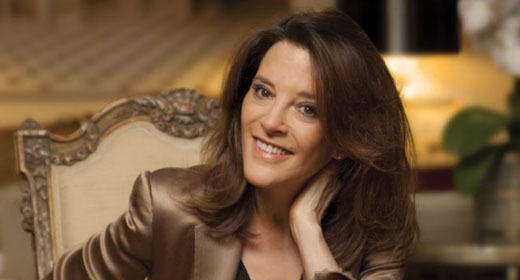 The fact that we’re addressing such an obvious scourge is a good thing, but how we’re looking at it is important. Too often we focus on things that distract us from the underlying causes of the problem.

In the words of the Indian philosopher J. Krishnamurti, “It is no measure of health to be well adjusted to a profoundly sick society.” Much of the chronic anxiety and despair rampant among people today are consequences of a soulless economic and political system that makes the health and well-being of the individual secondary to the short-term profits of multinational corporate interests. For those who have made it into the club that runs that system, and for whom the system is set up to serve, that’s not always such a bad thing. But the vast majority of people have not made it into that club and have no reasonable chance of ever doing so.

A major source of a problem that beleaguers so many is a system that cavalierly disregards the mental, emotional and physical well-being of tens of millions of people in America and more throughout the world.

Establishment forces would have us think otherwise, of course, like a magic trick meant to distract the eye from what is there in order to believe what is actually not there. They claim no responsibility whatsoever for the chronic economic tension that underlies so much mental suffering. A mother headed back to work is depressed because every cell in her body, programmed by millions of years of intuitive knowing, feels it’s too early to leave her newborn child? “No,” we’re told by the system that refuses to provide her maternal leave, choosing instead to support a business sector unwilling to absorb the cost. Putting their vision of economic prosperity before the humanitarian concerns of an overly stressed population, the establishment dismisses the problem as hers alone, rather than tracing it at least in part to where it belongs: at the feet of a government that so underserves her.

It’s also no accident that our political establishment has a convenient and very lucrative relationship with an industry that has made a multibillion-dollar profit center off exploiting that woman’s suffering. As of early August, Big Pharma had already given money to more than two-thirds of the sitting members of Congress this election cycle, totaling roughly $11 million in campaign giving. The pharmaceutical industry continues to be the top lobbying force in Washington, D.C. The United States and New Zealand are the only countries that allow prescription drug advertising, and these medical media buys soared from $1.3 billion in 1997 to $6 billion in 2016.

Our political-pharmaceutical-media matrix both creates and cashes in on America’s mental health crisis. More than 34 million Americans lived in poverty in 2019, according to the U.S. Census Bureau, and now millions of people have lost their jobs in the pandemic. These tens of millions of people are trapped in devastating situations with the constant companion of economic tension and anxiety. That anxiety is the core of the mental health crisis that plagues our society today. Social injustice inevitably produces social dysfunction, as the ravages of personal despair burst forth into behavior that is harmful to the self or others. Why is the conversation about how many homeless people have “mental health issues” (Wouldn’t you?), when the real issue is how insane it is that the richest country in the world has over half a million homeless people to begin with?

And then there are our children, another huge demographic at risk for mental health problems. People talk ad infinitum about suicide rates among teenagers and the clinical solutions establishment forces prescribe (“Let’s try putting her on a little higher dose” is among the most common), but we should consider how many of the stressors routinely put on our kids are a result of bad public policy. Primary among those is the prevalence of gun violence and its effect on our youth. The emotional and psychological burden of knowing that on any given day another mass shooting could happen at your school has got to be a river of anxiety running through the mind of every public school student in America. Add the fact that the grownups in Washington have refused to do anything about it, and the kids know it. All those lockdown drills they practice at school these days? That must be calming, don’t you think? Make sure you know what to do if Billy starts shooting up the class!

Until America looks in the mirror, we will not heal. It’s not only what we did to people hundreds of years ago, through enslavement or genocide, that we must examine. It is also the things we’re doing today, right now, to people who work hard or would if they could find a job but cannot rise above bare survival, to parents who cannot afford to send their kids to college or students who cannot pay their loans, to families running out of food and living in fear of being evicted. All while some of the wealthiest members of our society can’t decide whether providing a one-time $1,200 rescue is the right thing to do.