My journey to A Course in Miracles – Marianne Williamson

by Marrianne Williamson: I was in my mid-twenties when, just having moved back to New York from San Francisco, I went to a party with my then boyfriend Jeff. 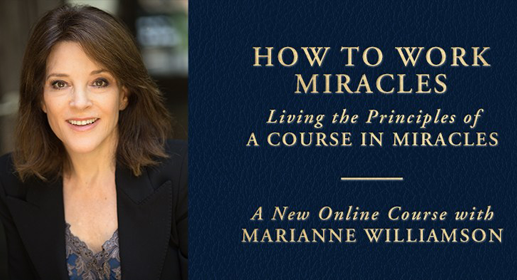 At one point during the evening I noticed a blue book sitting on the coffee table in front of me. The title of the book was A Course in Miracles.

I opened the book to the first page, where I read the Introduction: “This is a course in miracles. It is a required course. Only the time you take it is voluntary. Free will does not mean that you can establish the curriculum, but only that you can elect what you want to take at a given time.”

“What the heck is this?” I asked myself. “What book describes itself as ‘required reading?’” I turned the book over to see who wrote it, but no author was mentioned on the cover. Still intrigued, I opened the book to read from a few pages on the inside. What I saw was that the book was filled with Christian language, and that was it for me. I’m Jewish, and the book was filled with terms which weren’t my religious tradition. I put it down. At that point, the young man whose apartment we visiting told me that the books were sold out of an apartment at the Beresford Apartment Building at the corner of W. 79th and Central Park West.

And that was it. I didn’t think much more about the incident, and Jeff and I didn’t discuss it.

During the year that followed, I would often ride the bus up and down Central Park West. One day several months after seeing the book at the party, I was riding on the bus and saw a man across from me reading A Course in Miracles. Looking more closely, I saw it was someone who had lived in the same apartment building as me when I had lived in New York several years before; someone who had had a difficult relationship with my roommate. I felt that was significant somehow but I let it go.

Then, several months after that and about a year going to the party where I first saw the Course, I was riding that bus on my way to the doctor. As would happen every year during the winter months when I lived in New York, I was dealing with a bout of bronchitis. I knew I needed to deal with that on some deeper level. As we passed the Beresford Apartments at 79th and CPW, I told myself it was time. I was going to get A Course in Miracles.

A couple of hours later, after going to the doctor, I returned to our apartment. What I saw as soon as I opened the door was something unexpected sitting on our dining room table: a copy of A Course in Miracles.

Startled, I looked at Jeff. He said, “I thought it was time.” We had not talked about the Course that entire year.

And so, our journey began. Now the Christian language didn’t bother me one way or the other. All it takes is reading a couple of pages of the book to recognize that this is not a Christian tome. Yes, it uses traditional Christian language but in decidedly non-Christian psychotherapeutic ways.

Jeff and I were devoted students of the Course. One night, not long after we’d begun studying the material, I had a significant experience. I remember it like it was yesterday. Jeff was sitting on the bed and I was standing in the middle of the room. I got what today we’d call a “download,” just a very clear flash of knowing. I looked at him and said very simply, but sort of in awe, “I could explain this to my generation.”

Eventually I moved back to Houston and began a bookstore, where among other things I hosted study groups for A Course in Miracles. A couple of years later I moved again, this time to Los Angeles, where I began working at The Philosophical Research Society. Within a year, the President of The PRS asked me to give a lecture there on A Course in Miracles.

And that was it. My life’s professional journey was set in that moment. I don’t remember what month that was, but I remember my talk that Saturday was in October of l983. It was several months from the day I was asked to lecture until the day of the lecture, and during that time I would go home from work every day and reread the Course with as with a fine toothed comb. I was so determined to try to do well. There was no Internet at that time, but as the day of the lecture approached I wrote notices on index cards that I posted on bulletin boards at various coffee shops around the city.

The day of my talk came, and in a way I marvel at given that I’ve given literally thousands of talks since and couldn’t tell you what I wore even to the last one, I remember everything about what I wore that day. Red wool skirt. White cable knit sweater. Nude panty hose, thank you! Red stilettos. A necklace my mother had given me from Afghanistan. And cubic zirconia studs.

I was 31 years old. Later that day, Pat Ervin called me at home and asked me if I’d like to give a talk on the Course at the PRS every Saturday morning. I was totally in love with the task and used to bring ginger ale to every class to serve my students! The small group grew too large for the classroom, at which point we began to meet in the auditorium. Most of the people who attended the class were much older than me, people who had been reading the metaphysical work of the Society’s founder, Manley P. Hall, for years.

And then something happened. That something was dark and painful and sudden, not unlike the pandemic today. Everyone began talking about a new disease. No one knew where it came from, it seemed mainly gay men got it, and there was no cure. Anyone who contracted the HIV AIDS virus would almost assuredly die.

The medical community tried hard, just as they are trying now, but a cure eluded them. Religious institutions were oddly silent, I assume because of their need to work through homophobic prejudices. Yet there was a young woman in the Los Feliz area of Los Angeles, who talked every week about a God who loves us no matter what and through whom love worked miracles.

All of a sudden, my lectures exploded. Every week, more people came. And they were definitely a gathering place for gay men. We moved from the PRS to a church in Hollywood, adding Tuesday nights as well as Saturday mornings to my schedule and eventually Sunday nights in Santa Monica as well. I started AIDS support groups. I began lecturing twice a month in New York. After about a year, my work as a temporary secretary gave way to full time work as a teacher of A Course in Miracles. I had the career I had dreamed about at the Beresford apartments that day. I was spending my life talking to people about A Course in Miracles.

One night after one of my lectures in New York City, I met a literary agent who asked if I’d considered writing a book about the Course. I did, and it was called A RETURN TO LOVE: Reflections on the Principles of A Course in Miracles. The book was published in l992, and I had the great good fortune of being on the Oprah Winfrey show to discuss it. Oprah didn’t yet have a Book Club, but she told her audience that A RETURN TO LOVE was the best book she had ever read, and she’d bought a thousand copies to give to her audience. Needless to say, the book became an overnight sensation and remained at #1 on the New York Times bestseller list for the next 35 weeks. Oprah changed my life that day, for which I will always be extremely grateful.

As the years have gone by, I have written more books – most of them in some way or another about A Course in Miracles. I have remained, as I am now, a devoted student of the material. And now, at the age of 68, I’m interested in doing as much sharing as I can of whatever knowledge I have gained from it. It is life-transforming, but it is not always simple to practice. It is a course in love and forgiveness, but love and forgiveness are not always easy. I have succeeded at times and I have failed at time in applying the principles to my daily life, but I have learned a lot from both. And whatever I have learned, I am eager to pass on to others.

So next year, I’ve decided I’ll be starting the workbook again on Lesson 1 on January 1 – and I thought you might want to do it with me. We will deliver into your inbox every morning a video of my reading the lesson for the day, and I’ll give you my reflections of what it means as applied to our everyday lives. I recently did a live preview call of the program, if you would like to know more.

I hope you will join me.