by Donna Quesada: It started happening when I was around 18 years old. I remember one incident, in particular. It was during my first year at community college… 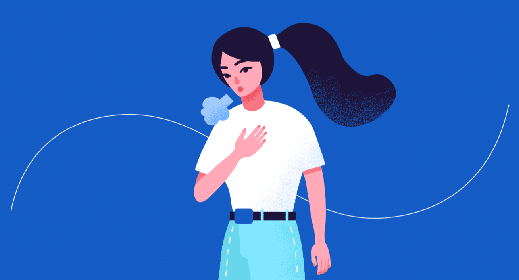 with some irony, right in the middle middle of a lecture on behaviorism in Psych 101. A single thought started the chain reaction: I’m not close enough to the door. And then another: What if it happens in front of everybody? The now familiar sequence was escalating, and I was starting to feel strange: There are no windows open!

Although I didn’t know it then, I was having a panic attack, which had before culminated in a complete blackout. With a pounding heart and a feeling of terror and helplessness, I would feel myself going pale and clammy only to wake up a moment later in total confusion.

But this time, I was determined to stop it from going that far. Out of sheer determination not to faint in the middle of the classroom, and in front of the cute guy in the next aisle, I instinctively started to breathe. I took the biggest, deepest, longest inhale of my life, as if that breath was my life line to consciousness, as if that breath could keep the sun from sinking, as if it could hold the sun above the horizon for just one more moment, and keep my universe from going dark.

The experience might be likened to that moment when you first look through binoculars. Before adjusting them, all you see is black with two tiny rays of light. You have to move them a bit to find that sweet spot where the pin-point beams are in position and then you can see.

As my world was starting to go dark, I continued to concentrate on each breath going in and out of my nose. One long inhale at a time. And one long, deliberate exhale. Inadvertently drawing on the singing lessons I had taken when I was little, I brought the air deep down to the bottom-most part of my lungs, so as to “breathe from the diaphragm,” as my vocal teacher would howl out. I held the breath in, once I absolutely couldn’t take in any more. I could feel my lungs at capacity and it felt satisfying. And then I let the breath go out in a careful and controlled way, not skipping to the end by cutting the exhale short. I slowed the rhythm down.

This whole drama was going on in the middle of the classroom, while the rest of the class feigned interest in a lecture given by an eccentric middle aged female professor who wore her jet black hair coiled at least six inches high on top of her head.

But finally, that blessed and miraculous moment came when I knew I was going to be fine. Relief would be an understatement. I had regained a hold of my consciousness. It was as if I was breathing existence into reality, or rather, breathing reality into existence. Those little streams of light got bigger and the world became vivid again. It was as if someone had thrown me a life raft… and that someone was me.

I had breathed my way out of the crisis. I was 19 years old then, and although I didn’t know it, I had also just discovered meditation accidentally, since the breath is exactly where meditation starts. That first conscious breath is the first tug at the yoke of the mind’s wild horses. Many years later, my own spiritual teacher would often speak of the power that the breath has over both the body and the mind: “The mind only has one master… the breath.” Which is to say, that there is only one way to truly pacify the mind and quell the fear thoughts that run amok when panic is coming on, and that is with the breath.

Breath is also the way to balance the nervous system. Without getting too technical, the ratio and length of inhales to exhales can increase or decrease heart rate and blood pressure, as well as adjust brain wave patterns. Throughout the years, by way of Yoga, as well as wanting to understand my own panic attacks better, I found that slowing the system is not always the solution for panic attacks (or vasovagal syncope, which is what my own panic attacks turned out to be). The brief increase in pressure that the sustained inhale delivers is optimal at that critical moment because faint occurs when blood pressure drops suddenly. But, as they say in commercials, be sure to consult your doctor, etc. … As a disclaimer, this is common to the mechanics of fainting and breathing, along with what I have learned, as it has applied to my case.

To come back to the general point… Our fear thoughts about the panic end up exacerbating the panic response! But we can not stop those thoughts by willpower alone. And so we have to call in the big guns… and there really is only one big gun — our very own breath. The breath adjusts not only our physiological response, but our racing mind, which is often the root of it all.

One deep breath is an immediate summons to the nervous system to balance and then settle into quiet repose. It’s a red flag to the racing horses of the mind. How can something so powerful be so easy and so ready? The better question is… why do we forget to do it?

In that breathing space, we find our equanimity, our power to remain still when the world is swirling around us, whether it be the world without or the world within. The hurricane spins and we stand perfectly balanced in the center… if we remember to breathe.