by Jay Michaelson Can you be both a bestselling author and a radical spiritual teacher? Apparently so in the case of Byron Katie, whose new book asks readers to question fundamental assumptions… 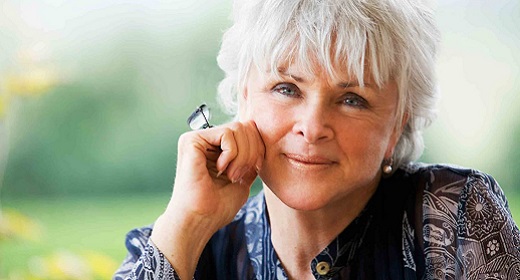 There are basically two types of spiritual writers. The first are the “skeptic guides”: relatable stand-ins for the reader, like Elizabeth Gilbert in Eat, Pray, Love or Dan Harris in the #1 bestseller 10% Happier. These people start out neurotic and normal, and take readers on their journey to something slightly less neurotic (and less normal).

The second type is less common: someone who has basically jumped off the deep end and is writing from a position of something like enlightenment, liberation, whatever. A lot of these people, we suspect, are frauds. But some—Eckhart Tolle, Oprah’s guru; the ’60s icon Ram Dass—seem, upon close inspection, to be the real deal. Which, you know, only makes us more skeptical.

Byron Katie—who combines the cutting wisdom of a Zen master with the look of a less-made-up Paula Deen—is in the second category. Katie herself hit bottom in 1986: a massive depression, suicidal despair, the inability to function as a mother, wife, or anything else.

And then something happened. Katie is too wise to call it “enlightenment” (it’s a truism that the more someone uses words like that, the less they’ve experienced it) but it was some kind of… shift.

As she describes in her new book, A Mind at Home with Itself, written with her husband, the poet and translator Stephen Mitchell, Katie suddenly realized that the multitude of thoughts and assumptions she was carrying around just weren’t that reliable. And when they were held a little more lightly, all those clichés about the present moment—radiant, pure, no problem, compassionate—came true.

“My depression had nothing to do with the world around me,” Katie writes in the book’s first chapter. “It was caused by what I believed about the world. I realized that when I believed my thoughts, I suffered, but that when I didn’t believe them, I didn’t suffer, and that this is true for every human being. Freedom is as simple as that.”

Recently, over tea at a New York City hotel, where Katie was staying during her book tour, I asked her how she does it. How does she manage to be both uncompromising in her own perspective—more on that in a minute—and a bestselling writer?

“Because this stuff works,” Katie told me. “It doesn’t take a teacher, doesn’t take another human being to do it. It’s 100 percent free.”

The “stuff” Katie was referring to is a deceptively simple technique she calls “The Work.” In The Work, you take a particularly nettlesome thought—my spouse is unkind, my job is unfulfilling, the world is a mess, whatever—and inquire into it. Do you really know that it’s true? What would you be like if it weren’t? What would it be like if you “turned it around” on yourself?

On paper, these questions may seem banal. In practice, they lead to a kind of radical skepticism about your own opinions and preconceptions that can be extremely clarifying. Once our interview was over, I did The Work with Katie on my envy of other writers, and basically started crying in that midtown hotel. She legitimately had me realize that I was happier with my life than I would be with theirs. For a minute anyway.

Or, to take another example, Katie said, in most of our relationships, “You really are who I believe you to be—and this is always false. That’s why inquiry is so important. We’re never dealing with each other—we’re dealing with our own internal lives.”

I pointed out that to many of my skeptical journalist colleagues, not to mention my “social justice warrior” friends, there’s something selfish about all this “get happy” stuff—maybe something narcissistic, puerile, mushy-headed.

“The Work is the essence of skepticism,” Mitchell chimed in. “If skeptical New Yorkers would take their skepticism further, and inward, they would see that what they think they know, they don’t really know.”

“The truth is, Katie is a radical teacher, disguised as a nice lady who calls you ‘sweetheart.’”

I countered that, living in New York, knowing stuff is the name of the game: which subway to take home, how much a Snapple costs at a bodega, how not to get taken advantage of on the street…

“And why am I so frightened?” Katie interrupted.

Well, I said, this a tough city.

“I know!” Katie replied. “I left my purse at a coffee shop or something years ago, and I walked out. Then I remembered and came back for it, but it was gone.”

But then Katie said something I didn’t expect. “My mind immediately started working on what they would do with my credit cards, and my money, but then I thought that they would see my children’s picture—and I thought of the joy, you know, that that can bring to anyone.”

“I remember you talking about the gift that the person could give to his girlfriend,” Mitchell added.

“Or the food for a child,” said Katie. “Or alcohol, whatever—we need what we need when we think we need it.”

Wait, so she had her purse stolen, but was really feeling joy and compassion? Really? This, I said, sounds radically different from the lives most people lead. Is it even compatible with a normal life?

“For me it’s a matter of do people suffer in it, or not,” Katie said. “I haven’t talked to anyone that is doing The Work that feels like he must do anything in particular with his life. We question everything.”

Even, apparently, how much it sucks when someone steals your stuff.

But wait a minute, I said. Some ideas are important—like “racism is bad,” for example. Do we really want to question that too?

“One effective kind of questioning,” said Mitchell, “would be to inquire into a statement like, ‘I’m angry at racists because they are ruining the country,’ or something to that effect. The fact is, that thought—even though it comes from a place of justice and compassion—is a thought that can cause tremendous stress and once you investigate it you find some very interesting creatures that live in the dark under that thought. And it’s to the benefit of everybody to be a little clearer about it.”

The truth is, Katie is a radical teacher, disguised as a nice lady who calls you “sweetheart.” For example, consider the passage in A Mind at Home with Itself where Katie says, “It’s all a dream—all of life, everything. Nothing ever is; nothing ever can be, since the very instant it seems to be, it’s gone. This is truly hilarious.”

But, I asked, if I’m feeling spiritually happy about getting robbed or racists ruining the country, aren’t I being irresponsible, given how privileged and fortunate I am?

“Isn’t it odd how people combine those two things [happiness and irresponsibility] when it’s just not so,” said Katie. “You know, the Dalai Lama has such a sense of humor. He’s such a good, clear man, it seems, and so bright.”

We sat there for a moment, perhaps reflecting on the horrors that the Dalai Lama has seen in his life, how much responsibility is on his shoulders, how his people are the victims of the largest ethnic cleansing operation on the planet right now.

Or maybe that’s just what I was thinking. Maybe Katie was just enjoying the moment.

Midway through A Mind at Home with Itself, Katie addresses the “enlightenment” question head on. “People used to ask me if I was enlightened,” she writes, “and I would say, ‘I don’t know anything about that. I’m just someone who knows the difference between what hurts and what doesn’t.’”