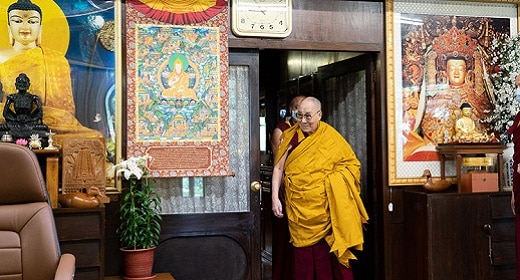 “I prostrate to Gautama
Who, through compassion,
Taught the exalted Dharma,
Which leads to the relinquishing of all views.

“What this teaches us,” he said, “is that we have to overcome ignorance, our misconception of reality, by developing wisdom.

“Chandrakirti also stated in his ‘Entering into the Middle Way’:

“Hearers and solitary realizers
Arise due to the powerful buddhas;
Buddhas are born from bodhisattvas;
And bodhisattvas arise from
The compassionate mind,
The understanding of nonduality,
And bodhichitta, the awakened heart.

“Developing compassion is the best way to follow the Buddha and repay his kindness to us. And along with compassion it’s important to cultivate an understanding of emptiness.

“Imagine Buddha Shakyamuni in front of you in person. Around him are other great upholders of the doctrine such as Nagarjuna and the Seventeen Masters of Nalanda. We still have their books, which we can read, and gain experience of what they wrote. Our principal offering to them is to read their works, analyse what they mean and integrate that understanding within ourselves. Also present in front of you imagine Avalokiteshvara, Manjushri and Arya Tara, embodiments of compassion, wisdom and enlightened activity respectively, along with Maitreya and Kshitigarbha.

“Remember Jé Rinpoché’s words from ‘In Praise of Dependent Arising’:

“Becoming ordained in the way of the Buddha
not being lax in study of his words,
and by yoga practice of great resolve,
this monk devoted himself to that great purveyor of truth.”

His Holiness suggested that the virtual congregation recite the seven-limb offering and a praise to the Buddha with him. He reminded his listeners that, moved by compassion, the Buddha generated the awakened mind of bodhichitta, realized emptiness and dependent arising and collected merit over three countless aeons. He recalled that the Buddha undertook austerities for six years, which is vividly depicted by a replica of the ‘fasting Buddha’ statue behind him.

“I thought it would be good for us to cultivate the awakening mind of bodhichitta together on this auspicious day commemorating the Buddha’s enlightenment, and although I expect to be here to take part for the next twenty years or so, I’d like to request those of you in the monasteries in South India to make this an annual event.”

His Holiness pointed out that in order to fulfil our own goals and those of others we need to cultivate bodhichitta. We do have self-interest, but we need to be wisely selfish. If we’re kind to others, he said, we’ll be happy and gather many friends around us. If we’re suspicious instead, others won’t trust us. People may be attracted by money and power, but having an altruistic attitude is more effective. The verses speak of inviting sentient beings as our guests and if we do that, we have to have something to offer them. Shantideva wrote:

Why say more? Observe this distinction: between the fools who long for their own advantage and the sage who acts for the advantage of others.

His Holiness recited verses for cultivating the awakening mind:

With a wish to free all beings
I go for refuge To Buddha, Dharma and Sangha
Until I reach enlightenment.

Inspired by wisdom and compassion,
Today in the presence of the Buddha
I generate the mind of full awakening
For the benefit of all sentient beings.

For as long as space endures
And for as long as living beings remain
Until then may I too abide
To dispel the misery of the world.

He followed that with the lines for taking the bodhisattva vow:

I seek refuge in the Three Jewels;
Each and every wrongdoing I confess.
I rejoice in the virtues of all beings.
I take to heart the state of Buddhahood.

I go for refuge until I am enlightened
To the Buddha, the Dharma, and the Supreme Assembly,
In order to fulfil the aims of myself and others
I develop the awakening mind.

Next, he repeated verses in praise of the awakening mind from Chapter Three of the ‘Guide to the Bodhisattva’s Way of Life’.

‘This is the supreme medicine, curing the sickness of the world, a tree of shelter for weary creatures staggering along the road of existence;

‘The causeway to cross over bad rebirths, open to all who travel; It is the rising moon of the mind, mitigating the defilements of the world;

‘It is the brilliant sun, dispelling the mist of ignorance from the world. It is the fresh butter risen up from churning the milk of the true Dharma.

‘For the caravan of humanity travelling the road of existence, hungry for the enjoyment of happiness, this is a feast of happiness offered as refreshment to all beings who approach.

‘Today, I summon the world to Buddhahood and to worldly happiness meanwhile. In the presence of all the Saviours, may gods, titans, and all rejoice.’

“Prayer has a role in all religious traditions, but by itself it’s not sufficient. In Buddhism we also use our minds. All Tibet’s Buddhist traditions uphold a complete presentation of the teachings, within which, tantra involves a subtle engagement of the mind.”

His Holiness quoted a Kadampa master who said, “By some stroke of good karma I have acquired this precious opportunity. May I use it well and not fall into the abyss of lower rebirth.

“We’ve conducted this ceremony for cultivating the awakening mind on the propitious occasion of Saka Dawa, the day we commemorate the Buddha’s enlightenment and mahaparinirvana, to encourage us in our practice.”

The session concluded with the recitation of auspicious prayers such as the ‘Prayer for the Flourishing of the Dharma’, the ‘Prayer of the Stages of the Path’, the ‘Words of Truth’, a Prayer for His Holiness’s Long Life and a final dedication prayer.

Folding his hands together and looking everyone in the eye, His Holiness ended with a simple, “Thank you”.