by Donna Quesada: No need for Patience– 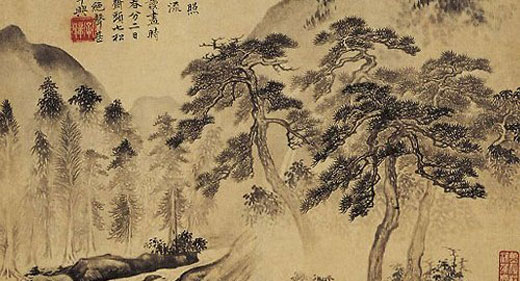 Patience is a virtue… everyone has heard it. But if there was no resistance in the first place, would there be any need for patience? Patience is needed to combat the feeling of opposition to undesirable circumstances. But if nothing was undesirable, you would just… be with what is… without any internal struggle. And with no need for patience.

I have found that after studying and teaching eastern wisdom traditions for 30 years, this is the one element that they all have in common… Drop resistance. Or said differently, Don’t mind what happens.

When the Taoist farmer’s horse runs away, his neighbor is quick to come and appraise the situation: “What bad luck!” he declares. The farmer just shrugs his shoulders. When the horse comes back with another horse, the neighbor comes again: “What good luck!” The farmer just shrugs. When the farmer’s son tries to saddle the newly acquired, wild horse and breaks his leg in the process, the neighbor comes again: “what bad luck.” The farmer shrugs. Finally, when the army comes, ready to haul the kid off to a bloody war, they take one look at his broken leg and decide to leave him behind. “What good luck! Your son sure picked a good time to break his leg!” the neighbor proclaims.

A broken leg is generally not seen as a “good” thing, but in this case, it likely saved the kid’s life. While the neighbor is quick to appraise, the farmer knows better. He knows that we don’t know whether something will come to be seen as fortuitous or not. It’s the wait and see attitude. This takes wisdom to know we don’t know, humility to yield to the unknown and courage to be fine with what is.

The Taoist attitude expresses a willingness to live in trust, rather than in fear. It is to say Yes and thank you to life.

Interestingly, thinking positive also becomes unnecessary when we don’t mind what happens. That is because there’s nothing to compensate for… no disappointment or frustration to fend off… And when there’s no frustration, there’s no resistance. This is one of the meanings of emptiness in both Taoism and Zen… no judgment at all. It’s not positive or negative. It’s not good or is it bad. It just is.

The Taoist Teaching of Wu Wei—

The wisdom of non resistance is encapsulated in the Taoist term, Wu Wei, which is translated literally as non-action. But I prefer Huston Smith’s creative quietude, as it more accurately conveys the sense of this pivotal teaching. Or better yet… the soft way. At the heart of Taoism is the lesson to flow with the way of nature and its cycles, rather than fight against it… That’s what the Tao means…the way. Wu Wei is non-resistance in action. It means choosing the course of action that is the least aggressive and forceful.

A fun and relate-able example is found in the act of floating. I remember when I was a child and first learning to swim, I was impressed when I saw someone float in water…”how can he do that,” I wondered. In my effort to replicate this phenomenal feat, I found that the more I splashed around, the faster I sunk. We all learned the same principal with regard to quicksand through childhood cartoons; the more you struggle, the quicker you sink.

I was traveling with my family a few years ago, despite the fact that I’ve always found group travel a bit challenging. We were taking my beloved grandmother’s ashes back to Italy. It turned out to be a wonderful and memorable trip after all. But when you’re traveling in close proximity together for an extended period, there are always those moments where you scrape up against each-other, especially with strong personalities who each have definite ideas about plans and agendas.

Because I don’t like conflict, I have a hard time speaking up for myself at times. This was true with one particular family member who has a tendency toward nitpicking. So, on this particular occasion, I kept my mouth zipped up when corrective comments were addressed to me. I thought I had let it go, but later in the day, the irritation came out unexpectedly (even to me), when I snapped at her for a seemingly small thing. She was perplexed. And I felt bad. I knew it was an unskillful way to express myself, and that I should’ve spoken up earlier about the real issue.

Although I made appropriate amends, things between us felt tense for a day or two. I remember feeling as though I wanted to explain myself better. There was a part of me that wanted to justify myself and make myself right. But with time, I saw that none of that mattered the way I thought it did. It was “extra.” The apologies had already been made and the reasons had already been given.

Then I was suddenly hit with the obvious…  The trip would be over soon enough and the wisest course of action from that point on would be no further action, at all. Let nature take its course. And so I decided to just let it be and experience the strangeness. And then, just like the storm that passed through that afternoon, the echoes of the conflict suddenly evaporated of their own accord. We were suddenly laughing together at the silliness of having snuck some of my grandmother’s ashes in a makeup container and it was like nothing ever happened. We knew that our playful and sweet grandma—always ready to get silly—would have been laughing the loudest.

It’s All About Chi!—

Proving and justifying takes energy. And this is the heart of Taoism…the conservation of life-force, or chi, as the Chinese call it. Excess fretting is a waste of precious time and energy. Wanting to make sure people get you… wanting to make sure they see it the way you see it… leaves us depleted. And in the end, what we thought was so important never mattered. We always see that we worried for nothing—the perennial lesson in life!

The Yin and the Yang—

Wu wei has infiltrated everything that is traditionally Chinese, for example in Chinese medicine, the idea is to gently restore harmony through the restitution of energy flow. In acupuncture, the needles are placed so as to nudge the flow of chi into balance, without the violent effects of harsh chemical drugs, whose side-effects are often worse than the original condition.

But it is perhaps most easily recognized in the martial arts. Here is my student’s description of wu wei at work, in his Kung Fu practice:

We seldom strike first. In that sense, non-action is the first step. We let the aggressor come to us. In our counter attack, instead of using brute force, we move in a way that redirects the energy of the opponent’s attack. Wu wei is implemented in that we don’t rely on our strength alone, against a possibly larger and more imposing opponent. Instead, we rely on presence, and by navigating through the opponent’s energy field until the time is right to deliver a blow. We’re moving with the opponent rather than resisting him.

Finally, wu wei implies an understanding of relativity. This is seen in the Yin-Yang symbol—we can’t know the light without knowing the dark. We can’t have spring without fall, right without wrong, comfort without discomfort. Thus, the Taoist holds back on his judgments about whether circumstances are “good” or “bad.” Often when things seem to go the “wrong way,” we later find that the catastophe was a blessing in disguise. For example, you got off on the wrong exit, but later learned that you unknowingly bypassed a horrible pileup on the freeway.

The light and the dark arise together. Note the significance of this: Unlike the assumption of western philosophy, which states that one ultimate “first-thing” causes the next thing, and so on, the Yin and the Yang arise together. Meaning, they both need to be there. They depend on each other. Life is… the good and the bad. And there are no absolutes—there’s a little bit of the one in the other, just as there’s a black dot in the white part, and vice versa. There’s a little bit of everything in all of us. There’s always something under the surface that is different than what you expected.

Taoist wisdom honors the cycles of life. Sometimes things are up and sometimes they are down. Wu Wei is to allow that movement.